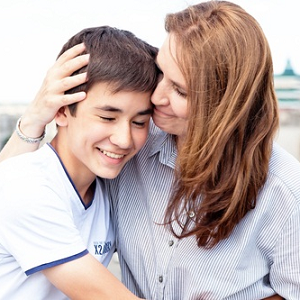 [Blind Gossip] This very beautiful actress from a long-running hit TV series was at The Golden Globe Awards with her actor husband.

Given how handsome he is, you would think that she would spend the evening by his side.

She was actually spending time with a different man.

No, it’s not what you think! She was busy taking her adult son around the room.

Was she trying to set him up with one of the many pretty young actresses who were there?

No. She was trying to set him up with a job!

She was dragging her son around from exec to exec telling them they ought to cast him in their next project.

Unfortunately, talent doesn’t seem to run in the family.

I was talking with a group of people including a producer who told us that she had seen the kid audition in the last year or so. She said he was a good-looking boy but had no acting talent. Zero. She said he was one of the worst actors she had ever seen.

She also said that [Zero] gets a lot of courtesy auditions based on who his mom is but apparently no one will test him more than once.

By the way, Zero is probably pushing thirty at this point, so it’s unclear how much longer Mommy can drag him around trying to “break” him into the business!

[Optional] Name an actor or actress whose career is based more on their famous name than on their own talent.