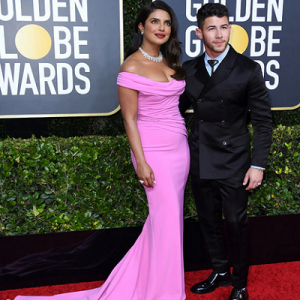 [Blind Gossip] This actress was nominated last night for a Golden Globe Award.

She and her date looked very glamorous.

Our actress was very gracious and attentive the entire evening… until her category was over!

Then it was a different story.

Right after [The Winner] gave her speech, [Our Actress] got on her cell phone and stayed on it almost continuously for the next half hour or so. It was like she just didn’t give a f* after she lost.

Maybe she was texting her agent, “That was a bust. You’d better get me to The Academy Awards!”

[Her Date] kept telling her to put the phone down. At one point he literally took the cell phone out of her hands and put it face down on the table. She gave him a nasty look and picked it right back up again!

Perhaps she could help get that Oscar nod by spreading a little more of her own nomination buzz?

Not Priyanka Chopra and Nick Jonas.

[Optional] Do you think she deserves/will get an Oscar nomination?