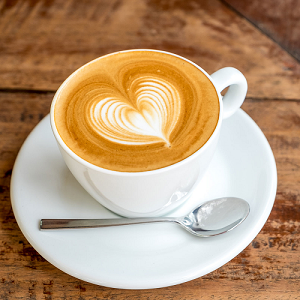 [Blind Gossip] It’s no secret that celebrities will sometimes spend ridiculous amounts of money to buy and decorate a home.

There is one celebrity, though, who was so in love with his bombshell actress wife that he went above and beyond to get her something that absolutely no one else had.

She was a big coffee drinker and used to stop at [name of chain] at least twice a day for a caffeine fix.

So he bought her a high-end coffee machine, right?

After all, there are Breville and DeLonghi coffee makers that cost $500-1000.

Or, maybe he went the commercial route and bought her one of those restaurant-quality espresso machines that costs $5000 or more?

These people live like rocks stars. They accrue diamonds and Birkin handbags and Lamborghinis like they are baseball cards.

You need to think bigger!

He went and paid the franchise fee to have a private [name of chain] in his house.

Yes, in his house!

It certainly was a grand gesture.

Too bad the couple wound up divorcing a few years later.

So, if you are trying to think of a unique Christmas gift for your caffeine-loving partner this year, watch for a sale on coffee franchises…

[Optional] What is the craziest gift anyone has ever given you?