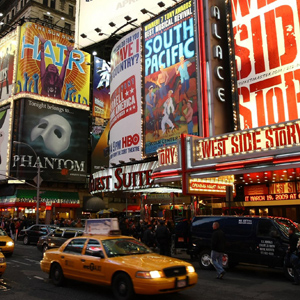 [Blind Gossip]  You already know that this attractive woman was on a TV show.

That is what gave her the celebrity to advance her station in life via marriage to a man in a famous family.

What you don’t know is the extent of her career goals.

While she said she would give up acting to create a different life with her latest husband, that promise did not last long.

She changed her mind.

In any case, she has now publicly declared her intent to return to acting.

However, you didn’t think that she was planning back to a TV gig on the same level as her last acting job, did you?

She is more famous now. Not any more talented. But definitely much more famous.

It isn’t just that she is demanding movies instead of TV, or that she will only work with esteemed directors worthy of her presence. There’s more.

[She and her husband] have been spending a lot of time with [a talented couple] for a very specific reason.

[The Talented Couple is] very plugged into Broadway. [Actress] sees herself not just as an actor but a singer and dancer as well. Her dream is to score a role that would normally go to an established triple threat. Her plan is for [The Talented Couple] to coach her and make the intros. She thinks that the lead in a Broadway musical and/or the lead in a movie musical would establish her as a star.

My, my, my. That is certainly a big goal! We have seen her act, but we have never seen her sing or dance in anything.

Wait a minute. Can she sing? Can she dance?

She can carry a tune. She took dance classes.

Whew! That’s a relief. We were a little concerned that an almost-40 actress who has never had a lead acting role in a major movie or even a TV show could pull this off. However, we can now see the error of our ways. If anything, our actress is over qualified for such a role.

She thinks that with the right roles, she could EGOT. [Her husband] is totally supportive.

We can see it now: Our triple threat actress… practicing in front of one of the many mirrors in her palatial home… giving her hapless husband and their crying child the hand… declaring, “Don’t bother me! I’m EGOTTING!”

If her husband is truly supportive, he should actually do something productive. Perhaps he could approach people at Hollywood parties and say, “Did you know that my wife is a triple threat? You should give her the lead role in your next musical!” That would definitely help. Everyone from Baz Luhrmann to Andrew Lloyd Webber would be eternally grateful.

And if she believes it and he supports it, our Actress should get what she wants, right? In fact, someone should start printing up the name plates for that Emmy, Grammy, Oscar, and Tony right now.

[Optional] Will she star in a musical? Does she have the talent to EGOT?