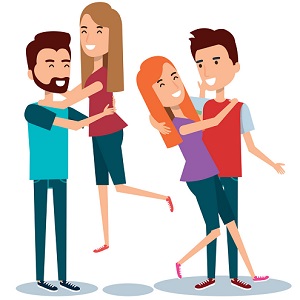 [Blind Gossip] It is always interesting to us when dating/engaged/married couples lie about the timing of their relationship!

Sometimes one or both were involved with other people when they started hooking up. However, to admit to that would bring criticism and the permanent brand of being a cheater, so they just lie about the dates and hope no one will contradict them.

This couple is engaged. What a happy event!

Richella hails from one of the wealthiest and most famous families in the world. She has a job, but it is one of those cushy jobs with a big title that may have been granted based on her family connections rather than on her own merit. Daddy “supplements” her salary out of his big bank account, but he likes to say that he raised a modern young working woman.

Then again, Daddy is in trouble right now about some other very young working women, so perhaps his opinions are best kept to himself.

Although they have known each other for years, they are saying that they didn’t get together until months after each split from their previous partners.

That is a complete lie. He was still living with his fiance. She didn’t move out until well after she found out that he was cheating on her with [Richella]. She was devastated.

Well, that’s a real fascinator. And certainly a different story than the one the engaged couple is telling!

Perhaps he saw an opportunity to “trade up” but strung along his last fiance until it was clear that his relationship with Richella would work out.

So, should we expect either the newly affianced couple or their exes/families/friends to come clean about the overlap?

No. There are too many prominent people involved and too much money involved. Nobody wants any controversy. If they spoke out it would be a scandal. Best for everyone to simply pretend that he is a nice chap for whom the timing worked perfectly. They will lie all the way down the aisle of [a big church].

God save the overlap!

[Optional] Smart strategy for the couple to lie?