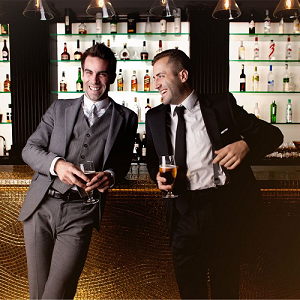 [Blind Gossip] We’ve talked to you before about the relationship between this actress and her boyfriend.

Their volatile, on/off relationship is, thankfully, off at the moment.

We were curious as to whether the boyfriend had displayed this abusive behavior towards women before or whether his relationship with our actress was the first example of this.

Actress is a pretty and petite girl who has starred on more than one TV series.

We’ll call the boyfriend Bar Guy, because at one time he used to work at a bar in a big city. Some people who have known Bar Guy for years relayed the following information to us.

We know him and we know a couple of women he dated before [Actress]. He’s always been a really nice guy. We were shocked when we heard about the domestic violence incidents. We had never seen him treat women badly before all this happened or heard anything like it.

Ready for an interesting twist to this story?

Bar Guy’s drinking habits and his attitude towards women seem to have changed… after he became friends with a group of very famous actors from Hollywood.

Let’s call two of the movie stars in the group Giant and Sticky.

While some female stars have a squad, these guys have a posse!

They were regulars at the bar, and [Bar Guy] started hanging out with them. They were all big drinkers, especially Sticky. They would take [Bar Guy] out with them after hours. They would go clubbing and get really drunk and pick up different women every night.

We’ve followed the exploits of Giant and Sticky and friends for a long time. Women are almost like a commodity to them.

We could not figure out how Actress wound up with Bar Guy in the first place. They simply said they “met through friends.”

Anyway, something changed after Bar Guy started hanging out with Giant and Sticky.

Bar Guy went from being a nice guy who was known for being respectful to women he dated… to being a drunk, violent jerk towards Actress.

Now, you certainly can’t blame Giant And Sticky for Bar Guy’s abuse of Actress. Ultimately, the responsibility does lie with Bar Guy.

However, the sequence of events – and the fact that Bar Guy’s bad behaviors only seemed to surface after he started regularly hanging out with Giant and Sticky and crew – is certainly curious.

[Optional] Do you think that hanging out with Giant and Sticky and their posse changed Bar Guy?