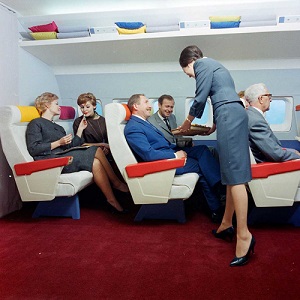 [Blind Gossip] Have you ever had the opportunity to fly first class?

Of course the food is better and you get a bigger seat and more leg room. More importantly, the drinks are free… and you never know which well-connected person you might wind up sitting and drinking with!

This story is about how all that free-flowing booze on a long flight loosened up the tongue of a certain Hollywood exec.

He started drinking even before we took off and a couple of hours later he was spilling his guts about various Hollywood celebrities!

Here’s one rumor that you have already heard for years. It’s about a famous singer who is married to a famous actress. Their arrangement has always been… questionable.

Yes, he is definitely gay! And [Actress Wife] has always known that he is gay. She married him anyway. They don’t have sex but she stays with him out of habit. They are comfortable with each other and he is nice to her. Much nicer than [Her First Husband], who it turns out she also didn’t have sex with!

By the way, Her First Husband is a huge movie star. Their marriage ended in divorce. Then she went on to marry our gay singer and start a new life.

Yes, we just dished on three big celebrities in one blind item!

[Optional] Why do you think she chooses these kinds of relationships?