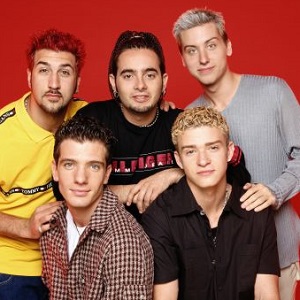 [Blind Gossip] This band has been nominated for/won many awards, including at least one Grammy.

The man has been with his wife for years.

A couple of years ago, they hit a rough patch in their relationship. He begged [His Mistress] to move to [his city] to be closer to him.

Yes, he was cheating on his wife! As a matter of fact, he had been seeing The Mistress for at least three years!

The Mistress is not at all famous. But she does provide an interesting twist to this story!

Do you remember that song his band did that featured vocals by a well-known female performer? Female Performer was even included in the video for the song.

However, everything is not what it seems!

While Female Performer is in the video and got credit for the vocals as a featured performer, the voice is actually that of… The Mistress!

Lead Singer swapped in her vocals.

Female Performer and The Wife still have absolutely no idea.

Nothing to do with NSYNC. We just like the photo!

Similar: The Real Reason They Left The Band

[Optional] Do you like the way your speaking/singing voice sounds in a recording?