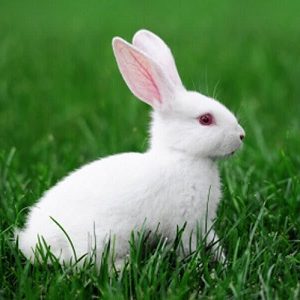 [Blind Gossip] This young film star has not said a word about the Harvey Weinstein accusations.

She probably won’t, either. She was his “it” girl, and if she says anything, it could lead to questions about exactly how Harvey bolstered her career, how he pushed other people into hiring her, how he set her up in a fake relationship, and how she keeps scoring leads even when her movies bomb, etc. She doesn’t want to go down that rabbit hole.

It will be interesting to see what happens to her career once Harvey is no longer there to “guide” her.

[Optional] What do you think will happen to her career? 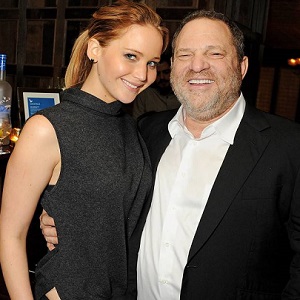 When multiple assault and harassment claims were made against leading producer Harvey Weinstein last year, one of his biggest stars remained surprisingly muted.

Jennifer Lawrence had appeared in a few films before working with Weinstein in The Silver Linings Playbook. Her performance in Winter’s Bone (2010) was critically lauded, and X-Men (2011) and The Hunger Games (2012) were both commercial successes.

However, it was Weinstein who took her career to new heights. Her performance in Weinstein’s The Silver Linings Playbook (2012) scored her a SAG Award, a Golden Globe Award, and an Academy Award for Best Actress!

Jennifer Lawrence then became the highest-paid actress in the world.

After SLP, Lawrence starred in the critically-acclaimed American Hustle, which was directed by David O. Russell, the same man who directed SLP.

While The Hunger Games and X-Men franchises continued to do well, the years since her Oscar have included a series of bombs, including Serena, Joy, Passengers, Mother!, and Red Sparrow.

The years have also brought a change in her relationships. Lawrence broke up with actor Nicholas Hoult and moved on to relationships with the much older Chris Martin (Gwyneth Paltrow’s ex) and the much older Darren Aronofsky (Rachel Weisz’s ex). Lawrence is currently dating art dealer Cooke Maroney.

Lawrence remained surprisingly quiet for the past year when multiple accusations against Weinstein surfaced. Then another actress said that Weinstein used his relationship with Lawrence to try to score with women. Lawrence just responded.

In a new lawsuit brought against Harvey Weinstein yesterday, a woman identified only as Jane Doe accuses the disgraced former mogul of sexually assaulting her and threatening to damage her career if she refused. The suit further alleges that, during a 2013 meeting, Weinstein forcibly performed oral sex on the woman; as she began to cry, he asked, “Do you even want to be an actress?” before adding, “I slept with Jennifer Lawrence and look where she is; she has just won an Oscar.”

In response, Lawrence has rebuffed that claim and condemned Weinstein’s actions. “My heart breaks for all the women who were victimized by Harvey Weinstein,” the actress said in a statement. “I have never had anything but a professional relationship with him. This is yet another example of the predatory tactics and lies that he engaged in to lure countless women.”

Lawrence won an Academy Award for her leading role in 2012’s “Silver Linings Playbook,” which was produced by the Weinstein Company. 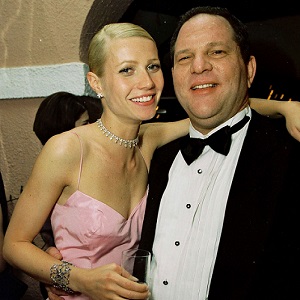 It is interesting that the story Jane Doe is telling is remarkably similar to one involving actress Gwyneth Paltrow.

Weinstein helped Paltrow win her first and only Academy Award for Shakespeare in Love. Then he told other women that he had slept with Paltrow. Paltrow vehemently denies his claims.

Isn’t Harvey Weinstein in jail yet?

Congratulations to Munkeemunkee for being first with the correct response! 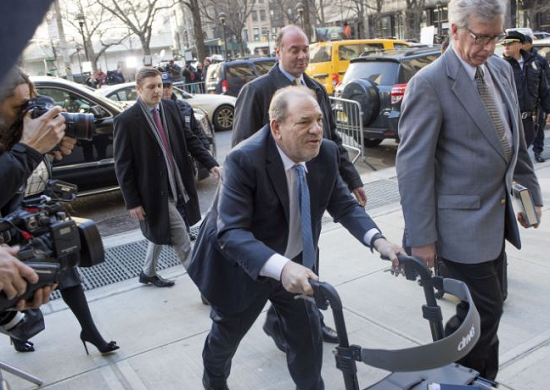 Harvey Weinstein is going to jail!

Harvey Weinstein was sentenced Wednesday in a New York courtroom to 23 years in prison, the culmination of a case that fueled the global #MeToo movement and encouraged women to speak out against sexual abuse.

“I really feel remorse for this situation,” the former Hollywood producer said, his voice barely audible, as he addressed the court before the sentence was handed down. “I feel it deeply in my heart. I will spend my time really caring and really trying to be a better person.”

Note that he does not apologize to his victims. He just feels remorse. Probably for himself.

“I’m not going to say these aren’t great people, I had wonderful times with these people, you know,” Weinstein said of his accusers. “It is just I’m totally confused and I think men are confused about all of these issues.”

Harvey Weinstein thinks that sexual assault is a “wonderful time” and that empathy for men in his situation is warranted.

Here is the next “wonderful time” awaiting Weinstein (cartoon by Benjamin Kikkert): 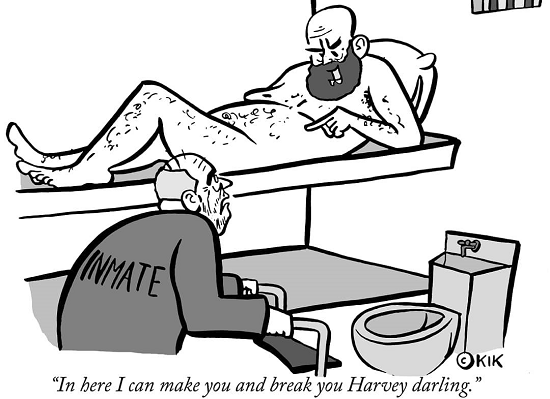 Back to the CNN story.

Weinstein, 67, arrived at his sentencing hearing in a wheelchair and in handcuffs. He had faced between five and 29 years in prison for last month’s convictions on first-degree criminal sexual act and third-degree rape.

“This is a first conviction, but it is not a first offense,” Burke said.

Weinstein wore a blank face as he was taken out of the courtroom. His accusers cried together in the front row.

Here are the three women who testified against Harvey Weinstein. 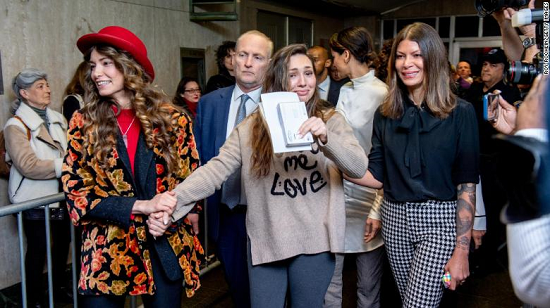 And here are some of the 80+ women who have spoken out about Weinstein’s abuse of women: 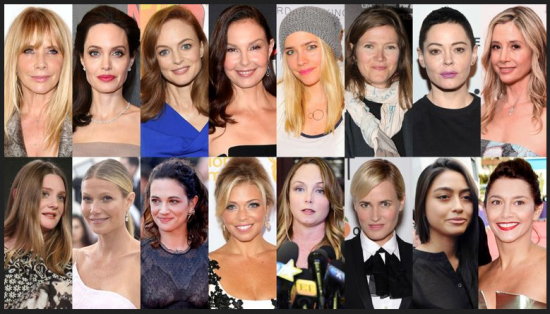 Of course, Weinstein’s defense team thought the sentence was excessive.

Defense Donna Rotunno lambasted the 23-year punishment as “obscene,” “obnoxious” and “cowardly,” and she argued that Weinstein did not get a fair trial.

Obscene, obnoxious, and cowardly are actually the perfect words to describe… Harvey Weinstein!

Congratulations to all the brave women who spoke out!