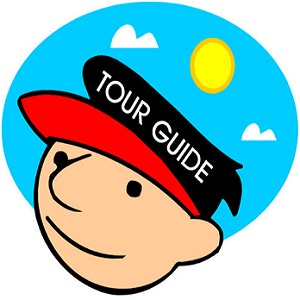 [Blind Gossip] This scary cable TV series has become so popular that it has spawned a whole tourist industry in the small southern town where it is filmed.

All the tour guides are licensed and insured and have buses and schedules and permits and a meeting place and an itinerary. Well, except for one.

The father of the child star of the show started operating his own “tour.” His tour has no bus, no schedule, no business license, no meeting place. You drive your own car.

While other tour guides are operating lawfully, this guy is leading dozens of people around the town, trespassing on private property, and completely ignoring any of the safety rules the other tour operators follow. According to the townspeople, he is both a nuisance and an insurance nightmare waiting to happen. It may not be as bad as a zombie apocalypse, but it is a significant problem for them.

The town has asked him to stop, but he laughs at them. “I’m the father of the star of the show! I’ll tell the producers to change locations and your town will lose!” While it is doubtful that he has that kind of clout, the townspeople don’t want to test his claims.

By the way, he used to say that all the money he charges for the tours went straight to charity. However, his lack of employment made people question that claim. Now he simply says that his tours “support” those charities.

Oh, and bring an extra $40 in cash if you want an autographed picture of his kid.

Similar: Up In Flames

[Optional] Should the TV Show’s producers step in to deal with this guy? 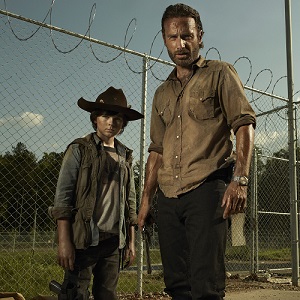 The character played by young actor Chandler Riggs has been cut from The Walking Dead!

The producers very suddenly killed off his character, Carl Grimes, the son of the lead character on the show (Rick Grimes, played by Andrew Lincoln) .

Chandler Riggs cut his “famous” mullet hair right afterward, so he will not be returning to the show.

Let’s talk about the haircut, the character cut, and the role that Chandler’s father may have played in this sudden development!

Riggs posted a photo of himself sporting a fresh cut while wearing a black V-neck tee and captioned it, “new hair who dis.” The photo has received more than 7,500 comments and 103,000 likes on Twitter. He later joked, “I feel so exposed like a naked mole rat or something.” 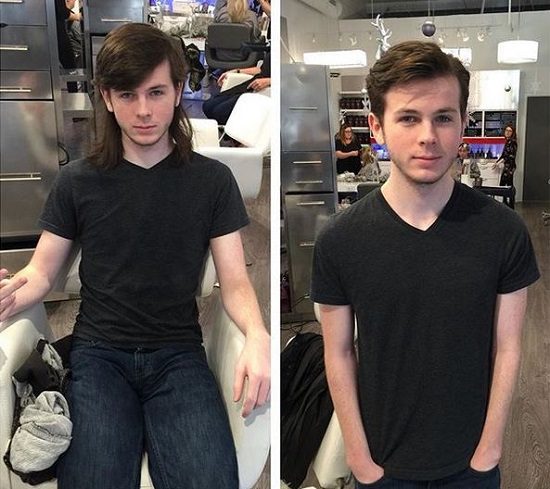 The actor, whose character (SPOILER ALERT!) revealed he’d been bitten by a zombie on the Sunday, December 10, mid-season finale, had worn the long, shaggy hairstyle since beginning his journey as the beloved Carl Grimes.

Riggs, 18, has come to terms with his character’s fate, telling The Hollywood Reporter the bombshell was “story-related” and important for the future of the show.

“I was planning on going to college until I found out. I found out when I was doing rehearsals for episode 6 back in June. It was quite the shocker for me, Andy [Lincoln, who plays his father] and everyone because I don’t think anyone saw it coming,” he told the outlet on December 10. “It’s definitely not a bad thing because it has been awesome being on the show but now I get to go and do a lot of other stuff that I haven’t gotten to do before.”

While the legendary zombie killer seems content with his fate, one person who isn’t happy about it is his father. As previously reported, William Riggs wrote on Facebook, “Watching [executive producer Scott] Gimple fire my son 2 weeks before his 18th birthday after telling him they wanted him for the next 3 years was disappointing. I never trusted Gimple or AMC but Chandler did. I know how much it hurt him. But we do absolutely know how lucky we have been to be a part of it all and appreciate all the love from fans all these years!” The post has since been deleted.

Did you read that last paragraph? Ohhhhh! Daddy’s mad!

See that finger that Chandler Riggs is giving the camera? That’s the same finger that the town of Senoia, Georgia is giving right back to Chandler and his father!

The move to cut a popular young character from a hit show certainly does not seem logical… unless you happen to know that there may have been some other factors in the decision-making process.

When you are a major production shooting in a small town, the last thing you need is for a relative of one of the cast to be ticking off the entire town. Rigg’s father was a thorn in the side of the townspeople, and a chronic headache for the producers to deal with.

While we can’t say definitively that Chandler Riggs was cut so the producers could get rid of his father, the townspeople of Senoia are certainly happy to see both Riggs and his father go!

Did you catch the “zombie apocalypse” clue? Good for you!

Congratulations to Gemzan for being first with the correct response!