[Blind Gossip] No one is really shocked at the demise of this marriage. Actually, it seems that it wasn’t really much of a marriage to begin with!

[The Wife’s Boss] set it up as a business arrangement from the beginning.

She didn’t want questions about a lesbian working so closely with her, and [The Wife] wanted a baby (but not out of wedlock) so she encouraged [The Wife] to “marry” [The Husband] even though everybody knew what a dog he was.

They are all ambitious, so at first the arrangement worked for everybody.

They never slept in the same room and they never had s*x, though, so I’m not really sure how the child/ren came about.

[Optional] Are you surprised about any of this? 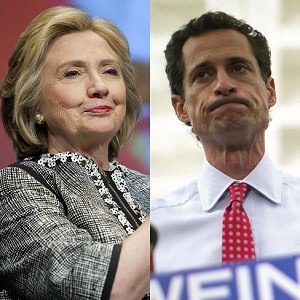 The marriage of Huma Abedin and Congressman Anthony Weiner was supposed to be political gold for all the parties involved.

Born in Michigan and raised in Saudi Arabia until she was 18, Huma Abedin has been by Hillary Clinton’s side since Abedin’s stint as Clinton’s personal White House aide in 1996. 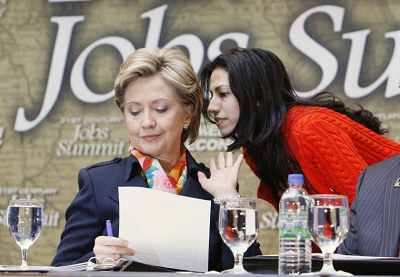 In 2001, Abedin met Anthony Weiner at a Democratic National Convention meeting. Weiner was a fiery, up-and-coming politician at the time.

At Hillary Clinton’s urging, the two went out on one date… but Abedin found Weiner obnoxious and walked out in the middle of the date!

In 2008, Abedin, at the age of 32, relayed to Hillary Clinton that she wanted a child. As a single Muslim female with a scant history of dating men, it would have been scandalous for her to have a child out of wedlock.

The Clintons leaped at the chance to advance their own political agenda, and urged her to pair up with Anthony Weiner.

At the time, Weiner was a successful New York City Congressman, and appeared to be in a good position to eventually become Mayor of New York City. Weiner, seeing a chance to secure a permanently close personal and political relationship with the Clintons, agreed to the match. Hillary Clinton said: “I have one daughter. But if I had a second daughter, it would (be) Huma.”

Awww. What a sweet and happy occasion!

Unfortunately, that happiness was short-lived.

Within the first year, Abedin became pregnant… but Weiner was already involved in his first of several rounds of s*xting and n*de photo scandals. Weiner blamed his s*xting on the fact that his wife would refused to be intimate with him and slept in a separate bedroom.

Abedin was humiliated and wanted a divorce, but the couple stayed together at the urging of the Clintons.

Abedin had the baby a few months later.

Over the next few years, Weiner continued to be plagued by more s*xting and n*de photo scandals. He eventually failed at his run for Mayor of NYC in 2013.

This is how happy they were when he was running for Mayor. 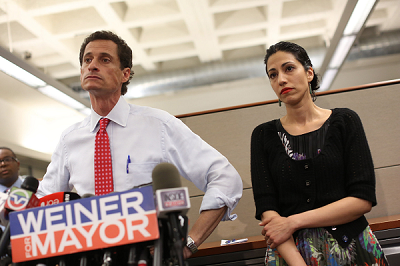 In August 2016, Weiner was caught s*xting an underage girl. The Clintons told Abedin to file for divorce.

As you now know, the FBI probe into Weiner’s criminal s*xual activity recently unearthed 650,000 emails on a laptop that was used by both Weiner and Abedin.

Some of those belong to Abedin, although the number (believed to be over 10,000) and content are unknown. Abedin claims she does not know how the emails ended up on the laptop.

For now, Abedin is off the campaign trail and Clinton is keeping her distance from Abedin.

Although Bill Clinton has said that Hillary has had s*xual relationships with women – and there has been much speculation over Hillary’s close relationship with Abedin – we do not know if Huma Abedin and Hillary Clinton are romantically involved.

However, we are confident in reporting that Abedin’s marriage to Weiner was a calculated political move on everyone’s part… and that it backfired miserably.

Congratulations to Ginnynotjenny for being first with the correct response!

BG Note: We know that many of you have strong emotions about the 2016 Election. Please keep your comments civil.