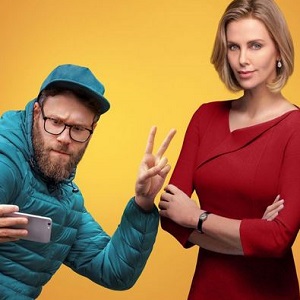 [Blind Gossip] Charlize Theron was recently on the Howard Stern show with Seth Rogen. They were promoting their new movie, Long Shot.

During their conversation, Charlize told Howard about the inappropriate move a film producer once made during an audition.

While she does not name him, she does say that the producer was and is “very big deal” in Hollywood.

Her story starts with her agent setting her up to meet with the producer at the producer’s home on a Saturday night.

It was my first audition ever. I had just turned 19. I might have still been 18. I had never been out for an audition. I asked this modeling agent if she ever heard anything, I was going to give this acting thing a try. She said, “Yes, go to this guy’s house, it’s on Saturday at 9:00 [at night].”

The producer didn’t want her to read any pages for the audition. He just wanted her to sit very close to him on the sofa and talk while he drank and made a move on her.

You can listen to the interview here:

Although Charlize Theron initially froze up when the producer physically made a move on her, she thankfully managed to get out of there.

It’s crazy… and girls talk about this where you just go blank… you don’t know what to do… but I left. I don’t even know how I got out of the house, but I left and I was driving my Ford Fiesta that I was renting up Laurel Canyon and I was so angry with myself that I didn’t say something. Why did I not tell him to go f*ck himself? It made me so angry!

If he did this to her, you can almost bet that she wasn’t the only one! It will be interesting to see if anyone comes out with a similar story about the same producer.

Similar: Down That Rabbit Hole

[Optional] If this happened to you, how do you think you would react?