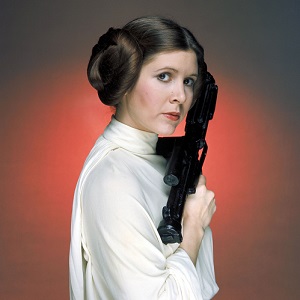 [Los Angeles Times] Screenwriter Heather Robinson – who also goes by Heather Ross – called in to a Tucson radio show Monday to share her own experience with a lecherous unnamed studio executive, only to reveal she had a secret ally looking out for her.

Robinson told “The Morning Mix with Greg Curtis and Mrs. Grant” on 94.9 MIXfm that she moved to California in 2000 and met with an Oscar-winning producer who proceeded to sexually assault her while the two were on their way to lunch.

“I felt safe thinking, ‘I’m overweight, I’m not attractive to these people, I’m not looking to become an actress,'” Ross recalled of the incident, which she was publicly silent about for years, fearing she had somehow invited the behavior.

After she fought the producer off, Robinson said, he told her, “You’ll never make a movie in my town and get the F out of my car.”

But redemption for Robinson came after sharing her story with Princess Leia herself, Carrie Fisher, whom she had befriended online.

Two weeks after sharing her story with Fisher, Robinson got a message from the actress, telling her that she had seen the producer in question at Sony Studios, so she hand-delivered a Tiffany box, wrapped with a white bow.

And what, precisely, was inside that pristine package?

“It was a cow tongue from Jerry’s Famous Deli in Westwood with a note that said, ‘If you ever touch my darling Heather or any other woman again, the next delivery will be something of yours in a much smaller box,'” Robinson recounted.

“It felt validating to know, ‘OK, first of all, this woman who I love as a friend was not just a fake Hollywood friend.’ That’s who she was. She spoke out and she put things out there in your face,” Robinson said.

Carrie Fisher was famous for being uncompromising and never shying away from speaking her mind. Fisher died in December at the age of 60.

You can listen to the interview below.

[Optional] How would you imagine the producer reacted when he opened that package?