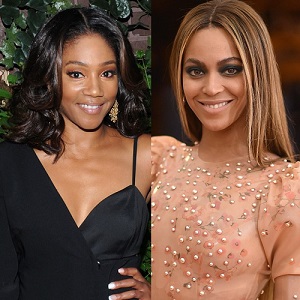 [Billboard] Tiffany Haddish is back with another hilarious account from her apparent blossoming relationship with the queen Bey.

In an interview on TV One’s Uncensored, the budding comedian told a story of a recent night hanging out at a concert with Beyonce and Jay-Z, when another unnamed actress touched Jay-Z’s chest during a conversation.

“I was talking to Jay-Z for a little bit,” Haddish said. “And there was another actress that was there who was also talking to Jay-Z. [The actress] touched Jay-Z’s chest and Beyoncé came walking up like…’B–tttchhh!’ But, she didn’t say that.”

Haddish explained that Bey’s body language implied that she was not thrilled. The Girls Trip star then went on to say that there was more that happened but she would not speak on it for now.

[Optional] Was the other actress being overly familiar? Or did Beyonce overreact?