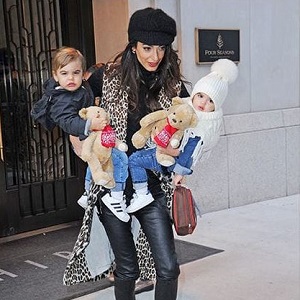 [Blind Gossip] This time next year, Amal Clooney may not be the only celebrity carrying twins around New York City!

This celebrity couple got married within the past six months.

He is much more famous and much more wealthy than her… and it looks like she wants to lock that down ASAP!

She is off birth control and has started on fertility drugs. It’s not because she is infertile. She is just trying to move things along. She wants to be pregnant in the first year.

They are a young couple and likely naturally fertile, so she must really be in a hurry.

By the way, she is not being sneaky. Her husband is on board with this.

He wants to be a young father and he thinks it would be really cool if they had twins.

[Optional] What was your first thought when you saw this photo of Amal Clooney and the twins?