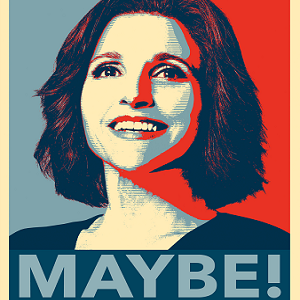 [Blind Gossip] There was a really fascinating conversation that took place recently between the representatives of two famous celebrities.

The subject was how to ensure a win for the male candidate in the next Presidential election.

It turns out that our male politician is not as confident as he pretends to be about his ability to win.

He does not think that this is a result of his own history, his own personality, or his own record in politics. He thinks that it is because of outside events beyond his control.

That dismissal of personal accountability aside, he thinks that he may have to do something very dramatic regarding his Vice President.

That’s what this discussion was about.

The gist of it is that he is seriously considering choosing a female candidate who has the potential to put him over the top.

Here’s the caveat: She would run with him… but only if he agreed to step down midway through his term so that she could become president!

He really, really wants to win, but in order to have her on the ticket, he would have to be willing to serve a limited term.

Would his ego even allow him to step down?

What would happen if he took her up on her offer and then changed his mind after they were elected?

Just how far would her team go to “enforce” his departure? (You conspiracy theorists should have fun with that part!)

We don’t know what reason he would give for stepping aside. Perhaps an illness?

In any case, it’s a fascinating proposition… and one that could potentially change the course of history!

Similar: Trump Having An Affair With Back Door Woman

[Optional] Should he do the deal? Please keep your comments civil.