[Blind Gossip] You may be wondering why this couple would continue to work together after announcing their divorce among some wild circumstances.

They might float statements about how they still get along and can work together. The real reason is a bit more simple.

They have been spending money like crazy over the past few years and they are in serious financial trouble. Their income from doing the TV show is double what they make “in real life” from [their businesses]. If they quit, they would definitely have to file for bankruptcy. So they can’t afford to quit, even though they absolutely hate each other!

[Optional] Are you surprised that they are in financial trouble? Tarek and Christina El Moussa from Flip or Flop are getting a divorce.

While everyone else was reporting that their TV show was over, we told you that, despite their divorce, they would continue doing the TV show.

That’s because we knew something that they didn’t: Tarek and Christina were out of money.

They spent money as fast as they could make it. They knew that they could not afford to quit. No matter how much they despise each other, they knew they would have to keep doing the show together.

Well, guess what: This divorcing couple has just signed on for more Flip or Flop!

“Flip or Flop” stars Tarek and Christina El Moussa have signed on for another full season of their hit HGTV show.

The announcement of the hosts’ — and former couple — return to the home improvement series comes amid a highly-publicized divorce that followed a domestic altercation last spring. When the duo announced their separation after seven years of marriage this past December, the future of the HGTV series was unclear and reports surfaced that the seventh season would be shortened. HGTV has ordered a whopping 20 episodes for the seventh season — more episodes than any season in the past of the home improvement show. Season 7 is slated to debut in December 2017.

According to HGTV’s website, their cameras for Season 7 “captured the ups and downs of Tarek and Christina’s house flipping business as well as their family life. While the couple has separated, each one has turned the page to a new life that includes a continued commitment to running their house flipping business together and delivering fresh episodes of ‘Flip or Flop.’”

“Tarek and I have been working together for a long time and we look forward to continuing to work together on ‘Flip or Flop,’” said Christina in a statement today.

Tarek added, “From the beginning, HGTV has shown Christina and me tremendous support and we are excited to go out there and flip many more houses for ‘Flip or Flop.’”

At the time of their separation, the co-hosts gave a statement to People, saying, “Like many couples, we have had challenges in our marriage. We had an unfortunate misunderstanding about six months ago and the police were called to our house in an abundance of caution. There was no violence and no charges were filed…During the process, we are committed to our kids and being the best parents we can be. We will continue to work through this process civilly and cooperatively, and plan to continue our professional life together.”

While no charges were filed, the spring 2016 altercation resulted in police responding to “a call of a possibly suicidal male with a gun” at the El Moussas home in Orange County, California. A helicopter and 11 deputies arrived at the scene, seizing five guns, despite Tarek claiming he only intended to “blow off some steam” and was not a threat to himself or others.

The couple officially filed for divorce earlier this year, and are parents to two young children.

This divorce is good for the Flip or Flop franchise. Yes, franchise. They plan to expand into more cities. Tarek and Christina will anchor the flagship of the franchise. 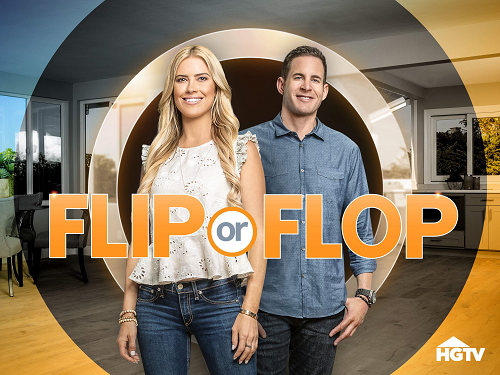 The reason the divorce is good is because the it “elevates” the show from a simple home improvement show… to a dramatic reality franchise. That’s a big win for HGTV!

Everybody got this one right, starting with BigMomma01, who definitely plans to redo her kitchen in white shaker cabinets with black granite counter tops and a grey subway tile backsplash!