[Blind Gossip] This young, award-winning film actress used to be in the media all the time. She was fun to watch because she was just so happy-go-lucky. And a little bit goofy. She just seemed to enjoy living her life.

Coincidentally, ever since she’s been dating that guy. You know, that older industry guy who loves to knock up actresses?

He has total control over her life now. What projects she takes, what interviews she does, who she hangs out with. He wants her to be mature and serious. He’s very, very controlling.

Why is she allowing that? Does she think that because he is older, he is automatically wiser?

Whatever you do, girl, don’t let him get you knocked up!

[Optional] Where do you think this relationship will lead? 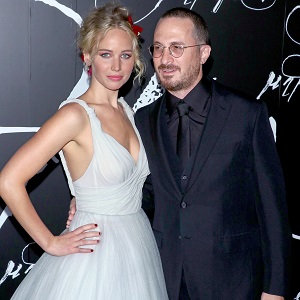 Did you notice how much darker 26-year-old Jennifer Lawrence got after she started dating 48-year-old director Darren Aronofsky?

Almost overnight, she went from fun and goofy to somber and dull. It was somewhat sad to watch.

Well, Goofy is back!

Lawrence and Aronofsky have broken up. From USA Today:

Jennifer Lawrence and Darren Aronofsky split after one year of dating

Jennifer Lawrence and her year-long boyfriend Darren Aronofsky have split, a person close to the situation but not authorized to speak publicly about it confirmed to USA TODAY.

The Hunger Games actress, 27, and director, 48, began dating after working together on the 2017 film mother!. Aronofsky directed the thriller in which Lawrence stars.

Lawrence broke her silence about dating the filmmaker in her September Vogue cover issue, calling Aronofsky an “amazing father” to his son Henry, who he shares with his former partner Rachel Weisz.

“When I saw the movie, I was reminded all over again how brilliant he is,” she told the magazine. “For the past year, I’ve been dealing with him as just a human… I’ve been in relationships before where I am just confused, and I’m never confused with him.”

They were also seen coupled up on the red carpet for the mother! premiere in September.

So in the span of ONE MONTH… mother! premiers… they come out publicly as a couple… do some photo ops together… she heaps praise upon him as a person/father/director in interviews… the film bombs at the box office… and they break up.

That sounds about right. They weren’t going to be working together again, and Aronofsky simply had no use for her anymore. No point in staying together any longer than necessary.

We’re just glad Jennifer Lawrence got out of a relationship with Darren Aronofsky without getting pregnant.

Congratulations to Mandlee for being first with the correct response!