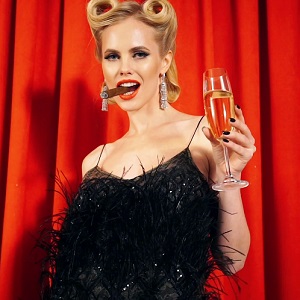 This famous movie actress may have done the same… but her timing is VERY interesting!

She normally smokes like a chimney and during events goes outside to take smoke breaks with her boyfriend. In the past few weeks, he has been going outside without her.

Maybe she’s getting healthier? But then there’s this…

She loves to drink. Always has a drink with dinner. She was not drinking at all during dinner even though everyone else at the table was.

Again, maybe she’s just getting healthier? But then there’s this…

She has been wearing only baggy clothes for the past month.

Well, it has been very cold outside. Maybe she has just been trying to stay warm with lots of comfortable layers? But then there’s this…

She is taking the rest of the year off from work.

Well, didn’t she say that she wanted to take some time off? But then there’s this…

She has been holding her bag in front of her stomach. Every photo.

Okay, that’s not a health thing or a cold thing.

So our actress has been drinking, smoking, wearing form-fitting clothing, and working hard for the past five plus years, but has suddenly stopped doing all of those things at the same time and is now rushing down the aisle?

That’s an incredible series of coincidences.

[Optional] Why do you think she is getting married so fast? Do you think that she is pregnant?