[Blind Gossip] This actress started out in the business when she was very young. She’s not that old now. Closer in age to Taylor Swift than Gwyneth Paltrow. It’s just that she’s been around forever.

She’s dated a lot. Mostly a bunch of actors.

There was even a rumor a couple of years ago that she was dating a very famous messed-up actor we’ve been talking about a lot lately.

A couple of years before that, it was that cute actor who didn’t quite treasure her the way she needed to be treasured.

A few years before that, it was a very famous athlete who has since gone down in disgrace.

If you just consider those three guys, she doesn’t seem to have a type. Those three are different from each other as can be.

Well, she’s got a new type… and we’ll tell you why.

Her sister recently married someone who is much older. Since that formula worked for her sister, our actress has now decided that it might work for her, too. So for the past couple of years, she’s been focused on guys twenty and thirty years older than her!

While it does seem weird when young and beautiful dates someone old and not-so-attractive, our actress has a plan. She really wants to get married in the next two years so that she and her sister can raise their kids together.

Old guys aren’t still sowing their wild oats and will be able to commit faster. She doesn’t particularly care how wealthy they are. She is definitely no gold-digger. Her wallet is probably fatter than the men she’s dating.

While it’s good to have goals, but there might be one catch with her newest old man.

[Optional] Do you think she will marry someone much older in the next couple of years? Just two days after we ran this item that exposed that George is still married, something amazing happened: He and his wife announced a divorce settlement! It’s a Full House Miracle!

Having to settle your divorce quickly because you got caught dating someone young enough to be your granddaughter? How rude! Artist George Condo and his wife, Anna, settled their divorce on Wednesday.

The couple separated in 2013, and Anna filed papers in 2014. But Condo, 58 — who was commissioned by Kanye West to create artwork for the 2010 album “My Beautiful Dark Twisted Fantasy” — has recently been seen around town with Ashley Olsen, 30, including “holding hands and snuggling” Sunday at Balthazar, and looking “romantic” at the Mercer Hotel in June.

Condo’s reps previously told us they were meeting for “business.” He recently created an ad for the Row, Ashley and Mary-Kate Olsen’s fashion line.

On Wednesday, Judge Matthew Cooper commended Condo and Anna for ending the marriage with “dignity and grace . . . There was a lot more than just money at stake here.”

During the four-hour negotiation, the couple couldn’t even sit in the same room together, and lawyers had to shuttle papers back and forth. Official paperwork still needs to be filed, but the agreement is binding.

“Couldn’t even sit in the same room together” now equals “dignity and grace”? Hahaha. Don’t kid yourselves. That was one ugly divorce fast-forwarded through sheer embarrassment.

Since Ashley is a gazillionaire and Condo is an “artist”, we wonder if she made a little financial contribution as an incentive to speed things along?

In the end, it didn’t matter, because Ashley has since moved on to dating Richard Sachs, who is… 58 years old! Sachs has been variously described as a New York City financier, as an art collector, and as an art dealer.

They have been spotted sucking face at a Knicks games and going for walks and to spin classes and to the supermarket. Ashley Olsen gets close to (another) ‘very rich, ancient man’

“They sat in the front row of the spin class and rode on bikes next to each other. They were ­affectionate after the class, despite being sweaty. She covered up in a big jacket and huge black sunglasses. They were canoodling and cuddly when they left holding hands. He looked like he could be twice her age. There’s no way that’s his natural hair color,” a spy told us of his manly black mane of hair.

Ashley Olsen has dated a lot of famous guys.

Remember her relationship with cyclist Lance Armstrong in 2007? And her engagement in 2010 to actor Justin Bartha, best known for his role in National Treasure? (BTW, “treasure” was a clue in the original blind item!) 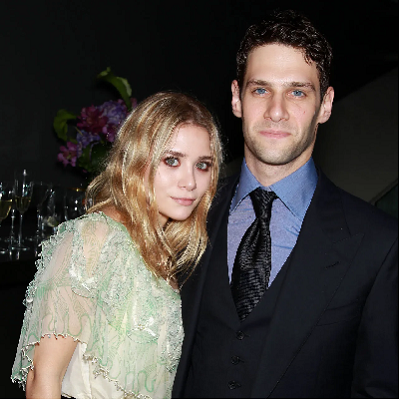 Oh, and remember when Johnny Depp was spending his nights at Ashley Olsen’s in 2012 when he was still with Vanessa Paradis? Scandalous!

Ashley’s last boyfriend was twenty years older than her.

Depp is 23 years older than her.

Condon is nearly 30 years older than her.

Sachs is nearly 30 years older than her.

Why is she dating men who are so much older?

Well, her twin sister Mary-Kate started dating Olivier Sarkozy in 2012 and married him last year. Sarkozy is 47. Mary-Kate is happy. Ashley is tired of dating around and wants to get married and have a family. She believes that an older guy will be more ready to commit.

In case you don’t think that the age difference is a big deal, consider this: Ashley Olsen is only three years older than Taylor Swift. If Taylor Swift was dating a 58-year-old man, the internet would be losing its collective MIND!

Congratulations to PriveNom for being first with the correct answers!