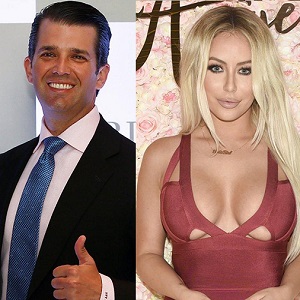 [Blind Gossip] You may have read by now that Donald Trump Jr. had an affair with singer Aubrey O’Day of Danity Kane while she was filming Celebrity Apprentice.

You might think that was an isolated incident. It was not.

There was another female celebrity who had a similar experience with him during the years he was filming Apprentice.

He told her that his marriage was in trouble and that he was essentially a free agent. He really pursued her. He told her that she was beautiful and smart and that was a rare combination. She was flattered. She said he was very kind and generous with her. When I asked her how far things had gone, she just smiled and said, “Pretty far!” so I don’t know if they were in love or just fooling around.

This “affair” did not occur during the same season as the Aubrey O’Day affair.

Similar: Trump Having An Affair With Back Door Woman

[Optional] You must have dinner with one member of the Trump family. Who would you select and why? Please keep your comments civil.