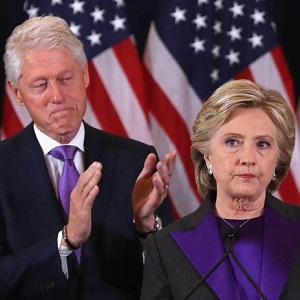 Penn writes, “It’s not hard to conclude that Bill and Hillary Clinton didn’t have at least a one-way open marriage.”

“Perhaps it was not by choice, but the stories accumulated over the years until the fact of it became apparent.”

Penn’s claims may confirm what many Americans have long suspected about the Clintons’ marriage.

Since losing the 2016 election, Hillary Clinton has done a number of speaking engagements, as well as written the book What Happened.

Clinton recently smeared Trump voters, saying that some voters who supported her opponent in the election didn’t like African-Americans getting rights.

“So I won the places that are optimistic, diverse, dynamic, moving forward, and his whole campaign ‘Make America Great Again’ was looking backwards,” she said.

“‘You know, you didn’t like black people getting rights, you don’t like women, you know, getting jobs, you don’t want to, you know, see that Indian-Americans are succeeding more than you are–whatever your problem is, I’m going to solve it.’”

Similar: The Real Drunk Her

Open marriage for Bill, Hillary, or both?

[Optional] Do you think Hillary Clinton should run for President in 2020? Please keep your comments civil.