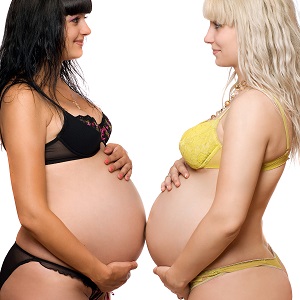 [Blind Gossip] Earlier this year, we told you about a TV actor whose career seemed to be getting bigger… while his marriage seemed to be disappearing! He had stopped wearing his wedding ring and his wife (who is an actress but not a star) was no longer by his side.

Now an even bigger mystery has turned up about this same relationship!

Someone sent us a photo of his wife… very pregnant!

In the photo, supposedly taken earlier this year, she and a friend are in someone’s kitchen. The girls are both very pregnant and seem to be admiring each other’s baby bumps.

Was his wife really pregnant or was it a very realistic fake bump? Did she get pregnant before or after she and our actor split up? Is it his baby? If not, is that the reason they split up? Did our actor secretly divorce? Is he secretly a daddy?

What is going on?!

This is one tough mystery and we would be lucky to solve it while we’re young. Frankly, it’s driving us a little crazy!

[Optional] Yes or no: Divorce? Baby?