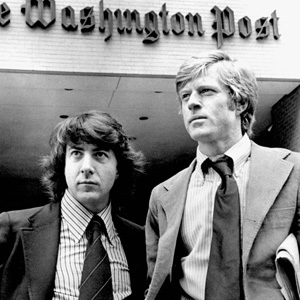 [Blind Gossip] You may recall that there was a New York Times blind item last week about a resister who admitted to swiping papers off of President Trump’s desk to keep him from signing them.

Well, Washington Post journalist Bob Woodward recently released a book about the Trump administration titled Fear… and has presented his own blind item about a White House staffer!

During The New York Times podcast The Daily, Woodward claimed that “one key person” in the administration privately called him after the release of his book.

After the information in Fear started breaking last week, one key person who’s in the office called and said, “Everyone knows what you said here is true. It’s 1,000 percent correct.”

And then this same person said some public things that contradicted that!

And I’m not happy, but I have a smile on face because the truth in all of this is going to emerge. There’s too much evidence, too many witnesses.

Is The Key Person who called Woodward after the book’s release the same person as The Resister? Or are they two different people?

Did The Key Person call Woodward from a pay phone? Why didn’t they meet in a parking garage? Did The Key Person tell Woodward, “The list is longer than anyone can imagine. It involves the entire US intelligence community”? Did they tell him, “Follow the money”?

So many unanswered questions!

Anyway, there were many senior officials who came forward in the past week to deny that they were The Resister in the New York Times article, as well as to denounce the veracity of Woodward’s new book.

On Monday’s Today Show, Woodward was asked about those senior officials.

They are not telling the truth. These are political statements to protect their jobs. Totally understandable.

We do not know if there will be fresh round of denials from the same folks about being The Key Person.

Related: I Am Part of the Resistance Inside the Trump Administration

[Optional] If President Trump discovers the identity of this person/these people, should he fire them? Please keep your comments civil.