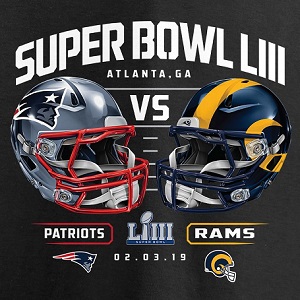 The New England Patriots will be battling the Los Angeles Rams at Mercedes-Benz Stadium in Atlanta. Superbowl kickoff time is 6:30 p.m. EST.

Let’s talk about some of the non-players who will be battling for attention that day!

The real competition is among the WAGS (Wives and Girlfriends).

The WAGS are going all out this year! They know they will be frequently shown on camera and they are going all out with promoting themselves, doing interviews, etc. to make sure they get the most airtime on Sunday. They are crazy competitive this year.

It’s not just the football players’ WAGS who are going to be there. The performers’ WAGS are also expecting airtime.

[One of them] asked for an entire private suite just for her family! Her people also wanted to know if we were retracting the roof that day (something about how it would impact lighting) and wanted to know if the windows in the suite could be opened so that camera shots of her would not be obstructed by the glass.

[Optional] Patriots or Rams: Who are you rooting for? Who will win?