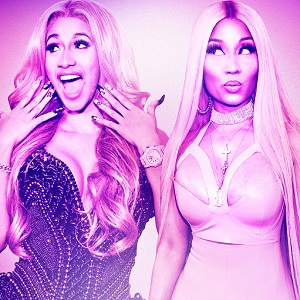 [Media Take Out] MTO just got a bit of tea that’s juicy… but also very heartbreaking.

Well, we just spoke to one of her GFs who told us, “[Entertainer] doesn’t want to say anything, because she’s not sure she’s keeping it.”

The insider added, “[Her boyfriend] wants her to kill the baby. He thinks its bad for her career and his. But she’s trying to get him to change his mind.”

Could this be Cardi B? We have no idea who it is, but many are speculating that the “Bodak Yellow” star is expecting and could even be as far along as 6 months. She claims that she “just gained some weight.”

There were also rumors of Rihanna possibly being pregnant following her performance at the Grammy’s. Rihanna was noticeably rounder and was much slower on her feet than usual. Rihanna suffered from fluctuating weight, so some are just attributing it to that… but, a pregnancy wouldn’t be far-fetched. She’s been in a loving relationship with her billionaire BF for some time now.

Nicki Minaj is also rumored to be pregnant with Nas’ baby. But we doubt this rumor could be about her. She’s been out of the limelight for some months now. A few more won’t hurt her.

Who do you think it is?

Similar: The Grammy No Show