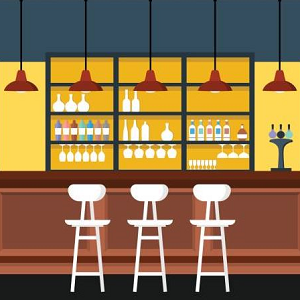 [Blind Gossip] We’re not sure if this famous actor is currently sober or not, but we have a story about his behavior a few years ago when he was definitely off the wagon.

He is the son of a Hollywood star and is a movie star himself.

He came in approximately nine in the morning. A few friends were with him.

He told us to run a tab. We knew who he was, so we did not question his ability to pay.

He then proceeded to order drinks for everyone… and to engage in some odd behavior.

He said something to the effect of how important exercise was for good health. He then started a full-out exercise program in the middle of the floor! Push ups and jumping jacks and martial arts moves.

He and his friends continued yukking it up.

After a couple of hours of drinking, they decided to leave. His friends walked out and he came up to the bar and said that he wanted to settle his tab (which was quite large by this point).

Did he tip well?

He did not even pay the tab! He claimed that he had lost his wallet but promised to send us the money. We never got it.

One additional hint: Our actor was once engaged to one of the most famous actresses in Hollywood. They starred in a movie together. They did not make it down the aisle.