[Blind Gossip] When one actor comes out, other actors watch to see the reaction.

Such is the case with this young actor, who has worked on more than one hit TV series. He just came out as gay. Good for him!

There is a second actor, a handsome guy in his twenties who is best known as a lead on a TV series. He is watching social media reaction to the announcement carefully.

Similar: Help This Actor With His Mom Problem

[Optional] Would finding out that your favorite actor is gay affect the way you view their performance? 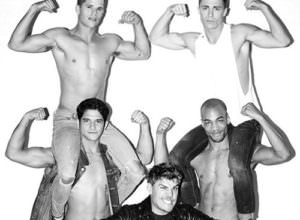 Charlie Carver of Teen Wolf came out in January of this year.

We told you that another young actor was watching him carefully to see how the announcement impacted his career.

Well, that actor was twenty-seven year old Colton Haynes… who worked with Charlie on Teen Wolf!

Things went well for Charlie. He is now working on Fist Fight, When We Rise, and A Midsummer’s Night Dream, all due in 2017.

His success helped to give Colton Haynes the courage to come out as gay this week. It was a difficult decision with which Haynes had struggled for many years. He had been out to the people around him, but was bothered by persistent attacks on his sexuality on the social media site Tumblr. Colton Haynes gets honest about life after Arrow

…“I should have made a comment or a statement, but I just wasn’t ready. I didn’t feel like I owed anyone anything. I think in due time, everyone has to make those decisions when they’re ready, and I wasn’t yet. But I felt like I was letting people down by not coming forward with the rest of what I should have said.”

The headlines about Haynes turned vitriolic in the absence of an announcement, but he was in no place to make one: He had checked into rehab for anxiety and would be frequently back in the hospital over the next three months.

“People want you to be that GQ image that you put out, but people don’t realize what it’s like to act 24 hours a day. I’d go home and I was still acting,” he says gently. “People who are so judgmental about those who are gay or different don’t realize that acting 24 hours a day is the most exhausting thing in the world.” The truth is, Haynes has been out for most of his life – in high school, to his family and friends, to his cast members, to his Hollywood bosses (like Arrow creator Greg Berlanti, now one of his closest mentors). But as a green transplant in Hollywood in 2006, he wasn’t any more immune to the town’s well-chronicled discomfort with LGBT identity.

Now, however, there’s a palpable energy around him, a positivity that gushes from a 27-year-old eager to start not just a new chapter, but perhaps a new book. He’s setting his eye on movies, on comedy, on theater and photography and music – all passions he’s keen to explore as a version nothing less than himself.

Congratulations to Colton Haynes! We wish him much continued success in his career and much happiness in his personal life.

Many of you were aware of the Charlie Carver announcement, but your guesses for the second actor were all over the place. The first person to guess both actors correctly without multiple guesses was Luvprue1. Well done, Luv! Unadorned was second.

By the way, it was nice to see that most of you would not let an actor’s sexuality impact the way you view their performance!