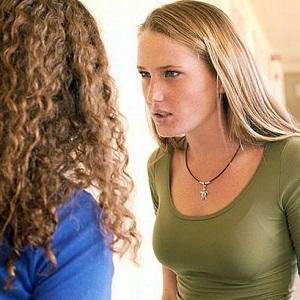 [Blind Gossip] These two female celebrities have been feuding for well over a decade now.

It started when they were both young stars. Shorter was a hot young movie actress and Taller had a TV show. They were frequent companions and party buddies until a crude comment left Shorter red-faced with embarrassment. Then a fight over a boy completely broke their friendship apart.

Since then, Taller has been relentless mean girl and flame-thrower when it come to Shorter. Lots of nasty comments that are occasionally made public. Yet, for some reason, Shorter keeps pursuing Taller and trying to reconcile with her. In fact, Shorter tried again very recently. Why?

[Shorter] is not in a relationship and doesn’t have many friends. She wants celebrities to do guest appearances on her new show because it would help bring good ratings, but none of them want to be associated with her. She thought it would be cool if Taller would do an appearance. They talked for maybe five minutes. Then they started fighting again and [Taller] hung up on her.

So… we take it that Taller did NOT agree to Shorter’s simple request to be on her new TV show?

Similar: Freaking Out Over Baby

[Optional] Do you think they should reconcile and work together?

Previous Post: « They Do Not Want To Save The Date
Next Post: The Non Wake Up Call »