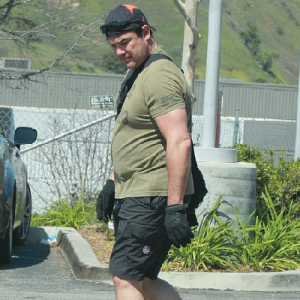 [Blind Gossip] This celebrity recently went for a stroll in the Southern California sunshine.

While he is probably best known for his starring role on a TV series in the 1990s, his career has been flying high for the past couple of decades. In fact, he has half a dozen films in production right now!

He’s a nice guy, too. While he is super busy with all those professional projects, he still manages to find time for charity work.

Given his fame, you would think that we would have recognized him immediately when we saw this photo!

Maybe it’s the angle of his face. Or his outfit.

Do you know the identity of our actor? Try to guess who it is without cheating!