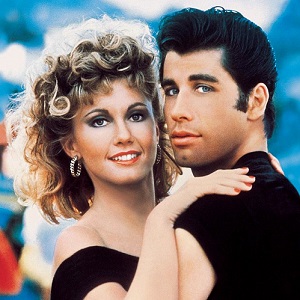 [Blind Gossip] In her new memoir, Don’t Stop Believin, Olivia Newton-John tells the story of how she met and dated a mysterious Hollywood legend!

She met him in a coffee shop.

He was a Hollywood bad-boy legend with a long list of girlfriends. He asked her out. Olivia lied and said she had a boyfriend.

Not too long after our coffee shop encounter, he ended up dating a friend of mine, actress Susan George.

Some time later, Olivia Newton-John was staying with her sister, Rona, and Susan George at the Beverly Wilshire Hotel.

Bad Boy asked Olivia if she would go out with him. This time, she agreed!

She says that Bad Boy was her first major movie star boyfriend… but she won’t name him.

She won’t tell. But she will tease it to sell her new book!

Similar: An Actor Goes to WeHo

[Optional] Your favorite song from Grease?