[Blind Gossip] This actor has been under a lot of scrutiny about his sexuality.

While he has been keeping a very

low public profile (with the exception of a magazine cover here or there), he isn’t exactly sitting at home with the wife and kids night after night.

In fact, he recently made an appearance at a WeHo gay bar with some male friends.

They were swigging down drinks and cracking jokes about a certain organization to which he belongs.

No, the organization is not The Hair Club for Men. 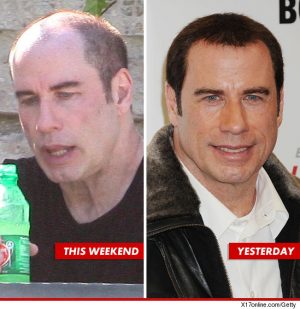 So, now you know.

John Travolta is actually bald and likes to go to gay bars in West Hollywood with his male friends and crack jokes about Scientology!

Please note that we are NOT saying that John Travolta is gay.

Going to a gay bar with your male friends does not make you gay.

Everybody got it right. Congratulations!