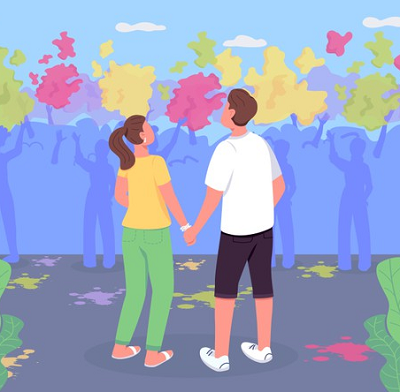 These two celebrities are from different fields. While she is a successful performer, his field is much greener than hers.

They are so in love!

Or perhaps they are so in love with convincing you that they are in love?

Why do we say that?

Well, it’s about those photos of them out for a day of fun.

Isn’t it amazing how a random visitor was able to capture so many intimate and close up shots of them hand-holding/hugging/kissing best all over the large facility?

It turns out that it actually wasn’t so random!

They knew it would be suspicious to hire a paparazzo from one of the well-known American agencies, so one was contracted from an overseas agency.

In addition to the usual fees, they had to pay for the day passes for him and (his family), so it was expensive.

There were only a few instructions. The photos had to look spontaneous and natural, not posed or awkward or obvious. Just two regular people in a crowd who are comfortable with each other enjoying the day together because they are in love.

In other words, no tonsil hockey. Nothing fake or over-the top that might jeopardize the credibility of them as a couple.

Now that you know that the paparazzo was paid, those photos might look a little less natural and spontaneous.

But, for the average person, it works. They really do like they are in love!

When should we start packing for the wedding?

Similar: Warm Up Those Tonsils

[Optional] Do you think they will get married?