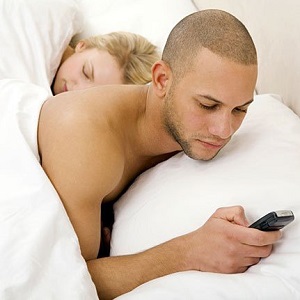 [Blind Gossip] This actress got married in the past year. She is thrilled with her new husband and is telling friends that the marriage is great and she is very happy and he makes her laugh.

She won’t find it too funny, though, when she discovers that her new husband is not being exactly faithful!

He had a girlfriend before her who he never really got over. He still sees her and talks to her and texts her.

She hears from him every damn day! Actress has no idea because he does all this behind her back. He’s very sneaky about it. She was bragging that sometimes he even texts her with [Actress] sleeping next to him!

Chatting up an ex while your wife is sleeping next to you? That’s definitely not funny!