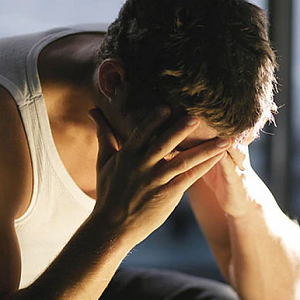 [Blind Gossip] There are some significant details about this actor’s story about his relationship with his actress wife that are missing.

The usual version of the story is that they fell in love after working on a movie together and they have lived happily ever after since.

They look so pretty and wholesome from the outside that this version is easy to believe.

Except… there is an awful lot of drama missing!

We don’t mind telling you that it wasn’t until well after their beautiful movie was released that the real drama started.

You see, Mr. Wonderful was friends with another, more famous actor. As that actor’s personal hygiene is questionable, we’ll call him Mr. Dirty.

Wonderful and Dirty were good friends… and drug buddies.

[Dirty] brought out the absolute worst in him. The two actors would do massive quantities of drugs together and act like assh*oles together. Then he would come home to [Actress] and act like an ass, too. It was like [Dirty] was causing him to become the worst possible version of himself.

Needless to say, our beautiful Actress did not like the impact this friendship was having on her husband.

She hated the influence [Dirty] had over her husband but it was so hard to pry him away from [Dirty] and all those drugs.

She tried to dissuade him from hanging out with Dirty. However, Wonderful had a mind of his own.

He didn’t take her seriously until she threatened him with divorce.

So when you hear about how Dirty “dabbled” in drugs with some of his famous friends, just know that it was much more serious than described… and that it almost led to the divorce of another acting couple!

[Optional] Would you be friends with Dirty?