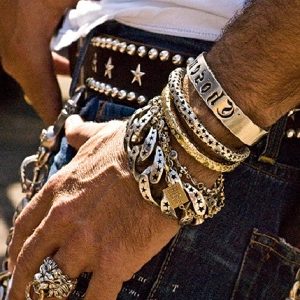 [Blind Gossip] This athlete and this model are supposedly dating.

A few weeks ago, they got in a big fight.

He was wearing a piece of jewelry in public.

What’s wrong with that?

It was given to him by an ex-girlfriend!

Our model – who has a famous last name – read him the riot act!

She told him that everyone watches everything that they do and he’d better not wear that again because people would start talking about how their relationship is fake and that he is still in love with his ex-girlfriend.

Now, we don’t know if he is still pining after his ex… but it is interesting that our model is so darn worried that people will figure out that their relationship is a big old fake!

[Optional] OK for her to tell him what to wear?