[Blind Gossip] One American actress is sending an entire foreign family into a tizzy!

This very famous and very rich foreign man is talking about proposing marriage to his girlfriend.

No, he has not purchased a ring yet. Right now he is just floating the idea to his family. The only problem? They are uniformly pushing back on his choice of a bride!

He fancies her quite a bit. Unfortunately, there is not a single member of the family who is encouraging the match!

His father is warning him that “a woman who is dramatic will be a problem.” [His brother] is telling him that he “is still young and has scads of time” to settle down.

Surprisingly, [his brother’s wife] has abstained from critiquing [the actress] directly. However, she has cautioned [her husband] that she thinks that [the actress] is “an opportunist” who “will do or say or be anything she has to” in order to make the marriage happen. She also thinks that he is “too smitten to be making good decisions right now.”

The biggest influence on everyone, though, will be [his grandmother]. She has seen how one bad apple can place the entire family and their legacy in turmoil. She is encouraging both [father] and [brother] to “discourage” his choice as “unsuitable.”

The relationship is not a long one, so it will be interesting to see if the man will give it some time before making such a life-altering (and history-altering?) decision.

[Optional] Does family opinion matter when choosing a spouse?

Well, it looks like everyone in the British Royal Family is going to have to untizzy themselves, because Prince Harry and Meghan Markle are engaged! 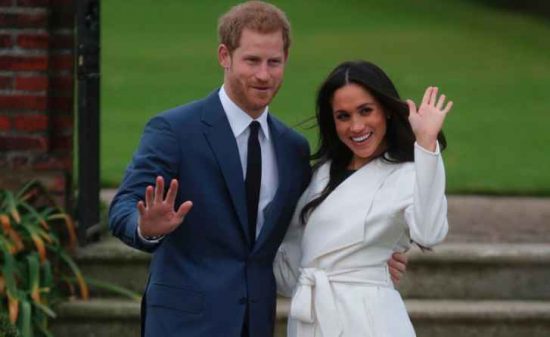 Prince Harry knew that Meghan Markle was the right person for him from the first date. He started talking to his family about the possibility of proposing to her approximately a year ago (when we first published this blind item).

He had to get the whole family on board first. That took a year, culminating with a meeting between Markle and The Queen in September (see Vacation Ingratiation).

And now royal wedding bells will be ringing! From The Telegraph:

Prince Harry and Meghan Markle engaged: Royal knew fiancee was ‘the one’ from ‘very first time we met’

Prince Harry has said he knew his bride-to-be Meghan Markle was “the one” from the moment they met, as the couple made their first public appearance since the announcement of their engagement.

The Prince, 33, declared that he is “thrilled” as he and the 36-year-old American actress posed for an open-air photocall in the Sunken Garden at Kensington Palace.

Their long-anticipated engagement was announced by the Prince of Wales on Monday morning with a statement saying the couple, who have been dating for 16 months, will marry in the spring next year. 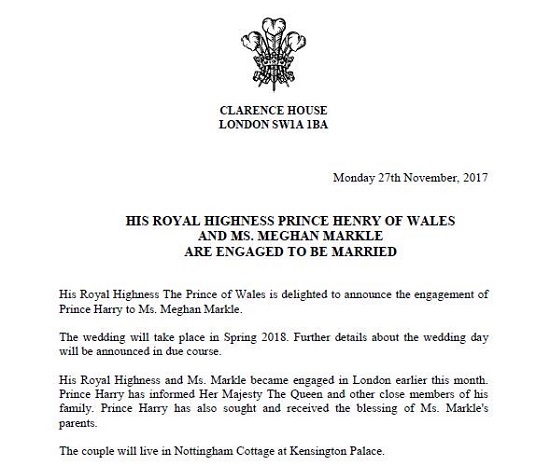 A beaming Ms Markle, in a white belted coat, clutched Harry’s hand with both of her hands as they posed briefly and showed off her diamond engagement ring – designed by the prince himself.

Harry revealed that he knew Ms Markle was “the one” from the first moment they met. “When did I know she was the one? Very first time we met,” the prince said.

The couple were smiling and giggling throughout their appearance.

When Harry was asked how he proposed, Ms Markle replied “Save that”, with Harry adding: “That will come later”. 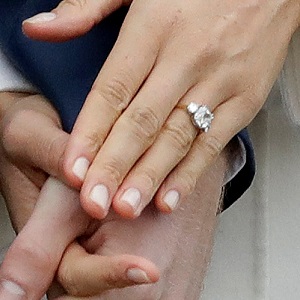 The two outside stones are diamonds from the personal collection of Diana, Princess of Wales.

At the centre is a diamond from Botswana, a country that holds special significance for Harry who has visited many times since he was a child.

The much-anticipated news was confirmed by the Prince of Wales in a brief statement issued by Clarence House.

It read: “His Royal Highness the Prince of Wales is delighted to announce the engagement of Prince Harry to Ms Meghan Markle.”

It revealed that the pair became engaged in London earlier this month.

“Prince Harry has informed Her Majesty the Queen and other close members of his family. Prince Harry has also sought and received the blessing of Ms Markle’s parents,” the statement said.

We’ll spare you the suspense of how he proposed to her. Here’s how it went down.

They were eating a chicken dinner.

He pulled out a ring.

Kudos to Buttersmom for being first with the correct response!

Previous Post: « He Wants To Get Away From Mom and Dad
Next Post: Trying To Make Him Jealous »