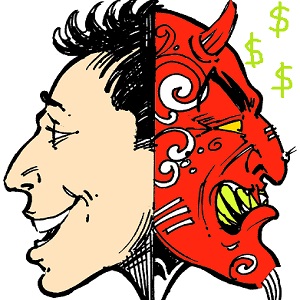 [Blind Gossip] This TV host comes across as affable and professional. However, an insider tells us that he is actually evil and selfish and greedy!

He comes in as the nice guy employee, but then he starts taking over, bringing his friends on and squeezing people out so he can make more money. He’s doing it on two projects right now.

On [TV Show 1], he wants [Cohost] gone. He wants to replace her with one of his friends, but they would not get producing credit. Being top-billed and cutting out one exec producer will mean more money for him. Doesn’t matter that [Cohost] was the one who helped get him the gig in the first place.

On [TV Show 2] he wants to add [Female Reality Star] instead of [another possible cast member] because he produces her show and it will make him more money personally if her profile gets bigger. Doesn’t matter if she is completely inappropriate for the gig.

I’m telling you, he is EVIL and SELFISH and GREEDY!

[Optional] What will happen next?