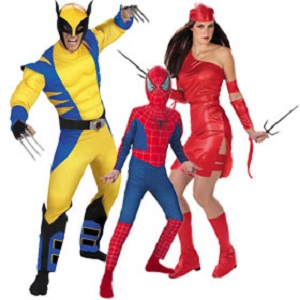 [Blind Gossip] If an actor has played a uniquely costumed character at some point in their career, they often try to move on so that they are not identified solely by that character.

For example, George Reeves, the original TV Superman, hated being typecast as the superhero. In fact, he hated it so much that he burned his Superman costume at the end of every season that the show was on the air.

Not every actor becomes so disdainful of their character. An occasional one may even slip on the costume for a one-off charitable event.

But… what if they do it more? Like, a lot more?

He is desperate. That’s why he keeps doing public appearances in costume. His financial situation is not good. His back end deal for the film is a lot more than his salary. This film was very expensive to produce. If it doesn’t hit certain numbers, he is financially f*cked. He’s going to wear that costume every damn day if he has to.

So, if you see this famous franchise actor riding the subway wearing that famous costume, just remember he’s not doing it because he loves the character so much or because he wants to amuse you. He’s doing it strictly for the money. Or the booty.

[Optional] Take a guess: How much money do you think he’s made over his entire career?