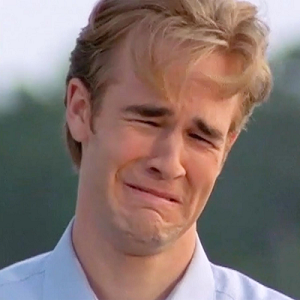 [Blind Gossip] We told you before that this actor was going to do everything possible to win back the girl he lost.

His latest attempt, though, is so ham-handed as to be almost funny!

She won’t take his calls or respond to his texts so he had to do something to get her attention.

Did he write her a love poem and have it delivered with a big bouquet of flowers?

Did he create a TikTok song and dance as tribute to their brief engagement?

Did he send her a fancy diamond ring that he actually paid for himself?

Did he plead to her on Instagram to take him back?

All good ideas, but our actor chose a different route.

He called [the paparazzi agency] and told them he would be at [place] at [time].

Aha! So the photographer didn’t just happen to be there. He was summoned.

He told them to make sure to catch him crying.

Aww! It’s like he’s writing his own little soap opera!

He really should have called James Van Der Beek for crying tips, though.

Now, that’s a cry to remember!

[Optional] Is the staged crying stunt sweet or pathetic?

Previous Post: « Factors That Make The Affair Even Worse
Next Post: Two Out Of Three Women Are Not Happy »