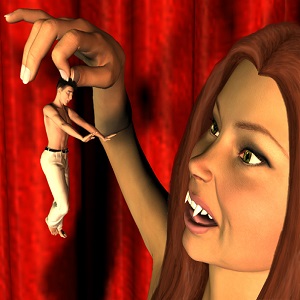 [Blind Gossip] We talked a lot about this male singer a couple of years ago.

Because he was involved in a messy relationship with a famous, man-eating female singer!

You see, Male Singer was touring with Maneater Female Singer.

Even though Maneater had a boyfriend – and Male Singer had a wife – they allegedly had an affair while on the road together.

Maneater broke up with her boyfriend. Male Singer filed for divorce from his wife.

Did Maneater go back to her previous boyfriend? No. She wound up getting an engagement ring from someone else five minutes later and married him. Yes, Maneater went through three major relationships in one year!

Did Male Singer go back to his wife? No. They eventually divorced!

However, Male Singer’s Ex Wife is having a hard time letting go.

[Tabloid] got a photo of him walking with another woman in the airport. They called [Ex Wife] for comment. She called [Male Singer] SIXTY TIMES in fifteen minutes. When he finally answered the phone, she demanded to know who the woman was, and then screamed at him that he’d better get rid of her or she was going to release all kinds of nasty personal stuff about him to the tabloid.