[Blind Gossip] The Executive Producers of this successful TV show with that domineering Male Star are now talking about a possible new cast member… who is actually an old cast member!

They are considering making an offer to his original female costar from years ago! She may be a bit long in the tooth, but people have always loved her. It’s good timing, too. Her last couple of jobs have flopped, she is ripe for the picking, the location is perfect… and they don’t have to worry about her sleeping with or getting stabbed by the Male Star!

[Optional] Bringing her back: good idea or bad idea? 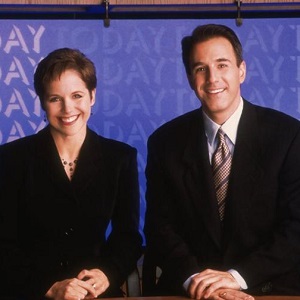 Last year, Matt Lauer and the producers at Today were looking for a new co-host.

The exits of Amy Robach, Ann Curry, and Natalie Morales had all been messy and dramatic. Lauer was not very excited about being paired with Savannah Guthrie. She was a nice person and competent enough at her job as the host of the third hour of Today, but she just didn’t have the chemistry with Matt, nor the star power to pull an audience.

Matt had always had great chemistry with Katie Couric, who was Matt’s co-host from 1991-2006. Her ability to pair well with Matt would be a “sure thing.”

After leaving Today, Katie had had a few career missteps. A failed talk show called Katie, an ineffective stint at Yahoo, and a low-rated gig as anchor of the CBS Evening News left her looking for a new opportunity.

There was some debate among Today producers as to whether Couric was now too old (she is currently 60), whether she would be interested, how much they would need to pay her, etc. Long story short, they were never able to close the deal with Couric for her return.

Much later, Today producers made the offer to Fox’s Megyn Kelly for her star power. Savannah Guthrie was kept in place at Today, and Tamron Hall got booted from the third hour of Today, while Megyn Kelly got her feet wet in morning TV and tried to develop an audience of her own.

Now that Matt Lauer is gone, everything is up in the air.

Who will replace Matt Lauer?

Will they keep Savannah Guthrie as the co-host of Today?

Will they move Megyn Kelly to the first hour?

Will producers reach out to Katie Couric again?

And… what about Ann Curry and Tamron Hall and Natalie Martinez and Josh Elliott and everyone else that Matt Lauer pushed out? Now that Mr. Evil is gone, all sorts of possibilities open up!

This could get interesting!

Congratulations to Themomica for being first with the correct response!

Related: His Wife Confronts His Colleague