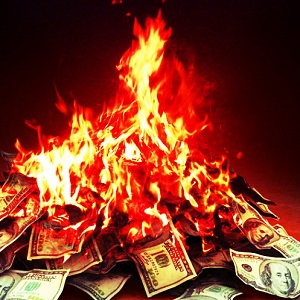 [Blind Gossip] We have been talking about this superstar celebrity couple for years.

We have also been talking about the decline of their marriage for years.

One of the current issues of contention between them (among many) is that he has reached the breaking point on her business venture.

Although they are incredibly wealthy (well over $100 million combined), he is not happy that he always makes money… and she always loses money!

He does not want to be pressured to help her keep her business afloat. He told her that they would be better off taking ten million dollars out into the yard and setting it on fire. At least they would get a good bonfire out of it!

Why don’t they just let her business go down?

Well, they are both incredibly vain and self-conscious about their public image (which is probably the reason they have held off on that divorce). Her business is her identity now… and her identity is half of their superstar couple identity.

The bottom line is that if she loses, he looks like a loser, too. And this is a man who is used to being a winner, both on and off the field!

[Optional] Should the husband bail his wife out of her business problems?