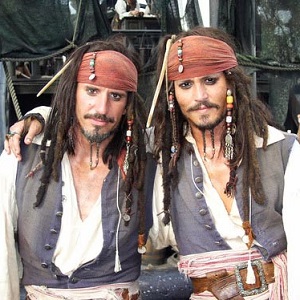 [Blind Gossip] Lots of re-shoots are needed for this action film that has finished principal photography.

However, the lead actress will not be participating. They are going to have a body double doing the work for her.

They were thinking of floating the rumor that the reason she can’t do it herself is that she broke her ankle during production. That would also serve as a convenient excuse as to why she missed so many days of production.

Really? What a disaster!

Nothing to do with Johnny Depp, who is pictured above with his own body double!

[Optional] What creative excuse would you come up with to explain her absence?