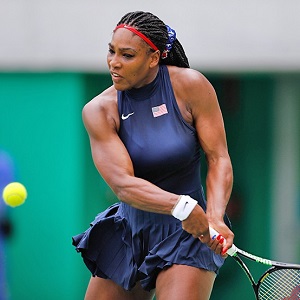 [Blind Gossip] Serena Williams will be seeded at Wimbledon despite a low world ranking after taking substantial time off for maternity leave and an injury. This is causing a major uproar!

As a general rule in tennis, the top 32 ranked players get seeded in a tournament. If you are not in the top 32, you may still compete, but you are unseeded.

Well, the last tournament that Williams won was the Australian Open more than 18 months ago. Serena William’s world rank is now 183. Last month, the French Open declined to give her any seeding. However, Wimbledon just decided to change their own rules… and give Williams a 25 seed for Wimbledon!

With the exception of Williams, all of the rest of the women are seeded in line with their World Tennis Association ranking.

The female tennis player who got bumped out of the top 32 for Wimbledon for Williams has voiced her strong disapproval. Another dissenter is a famous MALE tennis player.

When he heard that she was seeded at 25 for the tournament (even though her official singles rank is 183), he went on a little rant. He was saying that if women want the kind of money and publicity that the men get in tennis, they need to stop asking for exceptions. “If a man is physically unable to play for a year and a half for ANY reason, his rank drops and he has to work his way back up the ladder. That’s how it works. That’s how it should work for the women, too. No exceptions.” Then he went on about John Daly and the cart.

The latter comment was likely about golfer John Daly asking for an exception to use a cart in the Senior U.S. Open tournament because he was injured. He was denied and dropped out of the tournament.

Should exceptions be made for Serena Williams? For John Daly? Or should all athletes complete on a level playing field?

[Optional] If Serena’s friend Meghan Markle attends Wimbledon… and Serena winds up playing a British player… for whom should Markle root?