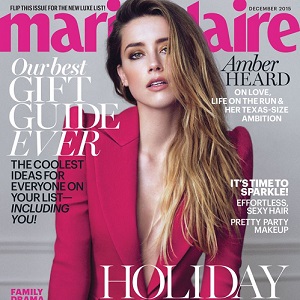 BG Note: Amber Heard recently spoke to Marie Claire magazine in anticipation of the release of her new film, Aquaman. One of the topics she discussed was dating in Hollywood.

[Marie Claire] While she would “never” fake a relationship for the sake of publicity, the Aquaman star claimed that she was approached over ten years ago to date a fellow actor, who was keeping their sexuality under wraps.

By the way, I was asked if I wanted to have a date with another actor who also “valued their private life.” And that was 2007. Can you believe it?

The quote does not specify whether the other actor is male or female, which is rather interesting.

The magazine is on newsstands now. We’ll provide a link the full online article when it is available. In the meantime, here is a link to a 2015 Marie Claire cover article about Amber Heard.

Similar: He Is Usually Drunk When He Says This

[Optional] Why do you Amber Heard dated/married Johnny Depp?