[Blind Gossip] What better place to spy a scandalous new celebrity couple than in the romantic city of Paris?

Last week this actor and actress were in Paris, holding hands and strolling along in the 6th arrondissement.

We walked along with them for almost three blocks in Saint-Germain-des-Prés. They were trying to be incognito. He was wearing a hoodie and she was wearing a cap but I recognized them immediately. He looked a little tense and was trying hard not to be noticed. She looked very happy and content. They were holding hands and being very romantic. They were definitely acting like a couple!

She is a beautiful actress who has dated at least a half dozen famous men. She dated a ball player for many years and was recently linked to the that slimy actor who is more handy with his mouth than his fidelity.

You might know this actor by certain parts of his anatomy, like his beautiful eyes. He is on a very popular Thursday night TV show. The only thing you need to know about his relationship history is that he is MARRIED.

They do not work together, but they are certainly playing together. No wonder he was wearing that hoodie and looking tense! Who provided you with the EXCLUSIVE six weeks ago that actor Jesse Williams and actress Minka Kelly were sneaking around and getting romantic all over Paris?

And now… Jesse Williams is getting a divorce! Jesse Williams has been married for five years to Aryn Drakelee-Williams. They have a son and a daughter.

Did you catch all the clues? Well, there were descriptions of some of Minka Kelly’s ex-boyfriends, including athlete Derek Jeter, whom she dated for four or five years and almost married. “Slimy” and “handy” (for Handy Manny) should have led you to Wilmer Valderamma, whom Minka dated in the past and with whom she has been seen recently. There were some clues about Jesse Williams as well.

You have to admit that Jesse Williams eyes are beautiful and a very distinctive feature! The word “anatomy” should have made it easy for your to finger Grey’s Anatomy as the relevant TV show. We even threw in the word “Scandalous” in English and French to direct you to a Shonda Rhimes production!

So, if you narrowed it down to an actor from Grey’s Anatomy who is married and has beautiful eyes… you should have come up with Jesse Williams!

We don’t know when Minka Kelly and Jesse Williams will come out as a couple… but when they do, remember that you  heard about it first from your friends at Blind Gossip!

Congratulations to BeingDan for being first with the correct answer! 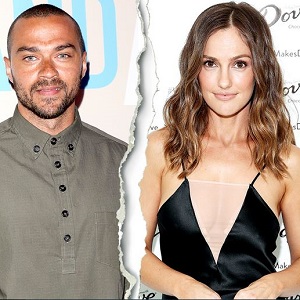 Jesse Williams and Minka Kelly have broken up!

BlindGossip.com was the FIRST to tell you that they were a couple back in March of 2017.

Williams was married at the time and had not announced any kind of separation from his wife. That’s an affair, people!

So, what did the relationship accomplish?

Well, it did succeed in breaking up his marriage! That’s something.

Williams and his wife filed for divorce in April, just a few weeks after our original blind item. They are now fighting over divorce terms/money/custody of the kids. The usual.

Minka Kelly was a real charmer during the whole affair. A fan commented on one of Kelly’s Instagram photos, “I hope the cheating rumors aren’t true. It would be disappointing.”

Kelly’s response was: “They’re not. Hate for you to be disappointed. Glad I could clear that up for you. Now f–k off.”

Kelly and Williams later admitted that they were, in fact, dating each other.

Now both Minka Kelly and Jesse Williams can move on to establishing – and ruining – relationships with totally new people. Good luck with that, kids!