[Blind Gossip] We read a lot of gossip reports. The most interesting one we read recently was that these two actors are planning to elope.

Allow us to fill you in on all of the details…

Wait, what details? They’re not eloping! In fact, he can’t even stand being around her!

However, his contract does obligate him to make public appearance with her, and he is not going to be the one to break their contract. That’s why you still see pictures of them on “dates”… and why fans can continue to fantasize about them being together for all eternity.

Their most recent outing was set up by her publicist. He is always told where to go meet up with her, either at her place (no, they do not live together), or a friend’s place. Then they all go out together in a group to a public, populated place for a couple of hours. He tries to limit their “dates” to group outings because he doesn’t want to spend time alone with her and he likes having his friends around him as a buffer.

However, there will always be one “private” date where he has to deal with her “alone” in a public setting. Hey, he’s an actor. If he can fake being a non-human for an entire movie, he can fake being on a date with her for one hour! If there aren’t going to be paparazzi present, the publicist also tries to set up some sort of “fan encounter” so photos can be taken as “proof” that they were together. He likes it when the fan encounter happens early in the “date” so that he can go home early. The photos are then posted on some gossip site a day or two later, along with some testimonial by the “fan” about how nice they were and how romantic they were with each other, and his obligation is complete.

He will be getting on a plane to Europe very soon, and is scheduled to start shooting a new film in April, so he hopes he won’t have to see her again for a while. He really likes being as far away from her as possible.

We’re telling you: the contract runs through August. He wants out before then, but right now she won’t let him go. So unless the studio and his people and her people can all agree to terminate the contract early, he is stuck with her. He is hanging in there. Just a few more months and then he can resume his normal life without her as a burden. The sun has definitely already set on this relationship. 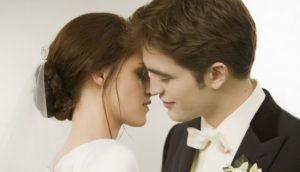 This story about Rob and Kristen eloping was fabricated by OK Magazine in March 2013, shortly after another PR outing with a “fan encounter” (see pic below).

Life & Style and Hollywood Life didn’t want to miss out on the fake excitement, so they repeated the elopement story. From Hollywood Life:

Rob is so in love with Kristen that he wants to go ahead and skip a traditional wedding and tie-the-knot when he’s back from shooting ‘The Rover.’

Kristen Stewart is about to become Mrs. Pattinson! The actress and Rob are reportedly going to get married. Read on to find out where Rob wants to have the ceremony!

Ok! Magazine is reporting that Rob doesn’t want to get married on the beach, or even back home in London.

“Rob has always had this romantic notion of making a baby,” a close friend says. “And he’s not even talking weddings on the beach, or in a castle, in some far off country. For Rob, eloping means slipping away to someplace in the backwoods, finding a priest, and coming back married.”

What Kristen Said When Rob Told Her His Idea

The report claims that Kristen “squealed.” Even though they’ve been apart for several months while Rob has been filming The Rover in Australia, the insider says that it was a good chance for Rob to do some “soul-searching.”

“If he feel for someone else he knows he’d always be thinking about Kristen,” the source says. “What she was doing, who she was with. The truth is, he needs to be with her and she clearly feels the same about him.”

Do you think it’s a good idea for Robsten to elope and not have a big ceremony in front of their family and friends? We think that anything involving these two lasting forever is a grand idea!

At the time this was written, the couple was at the very end of their contract, and we knew that they were scheduled to break up before the end of August. You can read all about the contract and the breakup in the BlindGossip.com post titled “The Sun Is Setting On This Relationship“.

And here’s the fan pic that the Daily Mail ran just before the elopement story in March 2013, with the breathless heading “Still going strong! Robert Pattinson and Kristen Stewart prove they HAVEN’T split as they are reunited after 64 days apart!”: After this ridiculous outing, Rob bought Kristen her own karaoke machine so he wouldn’t have to go out and do photo ops like this anymore. He wanted another 64 days apart and August couldn’t come soon enough for him.

Congratulations to MDuffe, who was first with the correct answer! Lots of you picked up on the Twilight and vampire-related clues: setting sun, non-human, eternity.

Kudos to NahlaSimone, who did a nice job of explaining PR contracts!