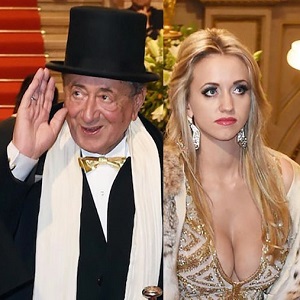 [Blind Gossip] You see this business hot shot in the media every day for doing or saying something noteworthy. However, he recently did something that is a little odd. Actually, he’s done a lot of things lately that are a little odd. However, this one involves contacting a very famous under-30 movie star!

He wants to talk to her about the film he heard she is planning on doing about [a business woman].

The motivation for this meeting isn’t exactly clear. Is he looking to invest in the movie? Is he looking to gain some insight about the fall of another high-flying billionaire? Does he compare his own inflated stature and public profile to hers? Or he is looking to hook up with the actress and is using this as an excuse to meet her?

Dating each other would certainly be a public relations coup for both of them. Despite the age gap and the educational gap, it’s not as implausible as you might think. Actress has a history of engaging in relationships with much older divorced men with multiple children. And Mogul was in a relationship last with a pretty actress who had just come out of her own volatile marriage. Actress and Mogul managed to end their past relationships while avoiding the bad blood that sometimes occurs with celebrity exes. That’s why it’s not a totally far off idea.

While we are not sure of his true motivation for wanting to meet her, a photo of a meeting between The Mogul and The Actress would certainly be one of the most gossiped-about photos of the year!

Similar: About A Pregnancy

[Optional] Why do you think he wants to meet her? Do you think they would make a good couple?