[Blind Gossip] Not so long ago, this superstar pro athlete’s super close relationship with his male roommate/assistant/personal trainer became a big deal.

Their friendship supposedly imploded over the athlete’s promise/failure to come out of the closet.

When the press got wind of it, the athlete quickly started dating an actress (perhaps to put rumors to rest about his sexuality), and the assistant suddenly shut up and moved away (perhaps because he was paid off to do so).

Here’s a quick update: The ex-assistant just got engaged. To a woman. And he wants to invite the athlete to the wedding. Does that mean that they are “friends” again?

[Optional] What do you think is the truth about any of these individuals? Remember back in 2013, when Aaron Rodgers was accompanied to banquets and other official events by Kevin Lanflisi, the man who had been his personal assistant and roommate since 2008?

Five minutes later, a bunch of NFL players were rumored to be coming out of the closet. The rumors swirled that Aaron Rodgers was one of the NFL players who was coming out.

Another five minutes later, something went terribly wrong with the long-time Rodgers-Lanflisi relationship.

Lanflisi let loose with a string of angry and cryptic Twitter messages like “I wish you would learn to love people and use things… not the other way around,” and “Silence always comes with an expiration date.”

Another five minutes later, Lanflisi moved out of Rodgers’ house. 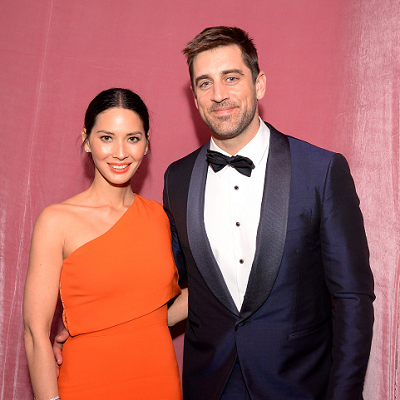 Whew! That was an exhausting series of events packed into an incredibly short time frame!

But you may be wondering: Whatever happened to Kevin Lanflisi?

In January of 2016, we found out that Lanflisi was engaged. In fact, he married a girl named Sarah a couple of months later.

Here is a photo from their wedding: If their wedding outfits look creative, it is likely because Sarah works works as a TV costume designer. They live in Southern California.

They look incredibly happy, don’t they?

What about Aaron and Kevin? Well, we hear that they are speaking again. Rodgers didn’t go to Lanflisi’s wedding (likely because it would have created a huge uproar), but it’s nice that he is reconnecting with old friends again.

Congratulations to Kookywooky for being first with the correct response!

Congratulations to Kevin and Sarah on their wedding!

Congratulations to Aaron on being a free man! We can’t wait to see what happens next…